The article written by Lawyer Vo Dinh Duc titled “Every step counts – Lessons from a lawsuit pertaining to a layoff in a foreign-invested enterprise” is published on The Saigon Economic Times dated 13/6/2013. 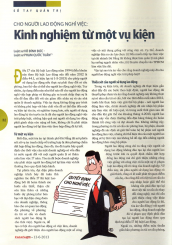 (Please click onto the images to read the article in Vietnamese)

Article 17 of the Labor Code 14 allows employers faced with the need for corporate restructuring to retrench employees. Unfortunately, implementing this article without stirring controversy remains an uphill task for many firms.

Failure to comply with the proper procedure for firing employees can result in lawsuits. Should the court rule that an employer is at fault, his/her company will not only have to revoke the retrenchment decision but also have to suffer severe damage.

Recently, a court in Danang looked into a dispute in which a labor agreement was unilaterally terminated. The final verdict was that the decision made by a foreign-invested enterprise to sack an employee with 17 years of working experience was inconsistent with prevailing regulations and that the company would have to re-employ this person in addition to making compensations.

The representative of this firm told the court that it had conformed to Article 17 by taking the necessary steps (developing a restructuring plan with a list of employees to be retrenched, informing these employees, releasing decisions to terminate labor agreements and providing severance)The company even discussed with the trade union the list of employees to be laid off, informed the local labor authority about this list, as well as the restructuring plan. Moreover, it also provided some career options: (i) the employee concerned can continue working at the Danang branch in a non-managerial position or (ii) the employee can move to HCMC for long-term employment.

However, the firm was still deemed to have violated the laws since the employee managed to convince the court that there was no need for the enterprise to carry out a restructuring plan. In late 2012, before the retrenchment decision was unveiled, the company itself commended the employee’s division for its efficiency. Until the dissolution of the division in April 2013, this employee enjoyed monthly bonuses thanks to good performance. Moreover, while the entire division was dissolved, only the employee concerned was mentioned in the restructuring plan.

The employee also pointed out that retrenchment without retraining amounted to a violation of the law. In response, the firm argued that, unlike in the case of retrenchment due to technological change, there was no need for it to retrain employees when the restructuring was due to mergers and acquisitions; instead, simply offering new career options would suffice. Upon consideration, the court agreed with the employee.

Coupled with the fact that the employee managed to show the remaining 49 people in the same division retained their jobs, the court ruled that the restructuring plan was a deliberate attempt to justify the retrenchment of the employee concerned.

Second, all those affected by a restructuring plan must be mentioned in the list of employees to be retrenched. Moreover, since whether retraining is necessary for all cases of corporate restructuring remains a contentious issue (the Supreme People’s Court itself considered a law suit pertaining to this issue between Coca-Cola and Vo Van Dao), it is advisable for firms to err on the side of caution and conduct retraining course.

However, it should be noted that, according to Article 44.1 of the Labor Code 2012, the company does not need to retrain its staff if there is no new job in the firm itself. Should an employee refuse to cooperate when it comes to retraining matters, such refusal needs to be recorded in a written document, which is to be certified by the trade union.

The lawsuit has offered much food for thought not just for the parties involved. Ultimately, the stringent regulations governing the retrenchment of employees are necessary for safeguarding the interest of these people, who are clearly at a disadvantage when disputes with employers arise.